Scotland has produced its fair share of top Hollywood names, and there have been a surprising number of movies filmed in Scotland too. Our jaw-dropping scenery provides the perfect backdrop for the camera, with rugged landscapes and ethereal geological features which have everyone watching in awe.

Visit the country’s movie trails and follow in the footsteps of your favourite characters and discover famous Scottish filming locations which include vast beaches, ancient castles, mountains, rolling hills, distinctive cities and historic towns and villages. 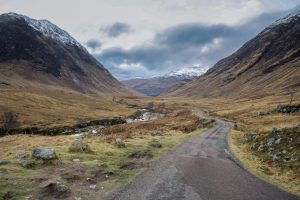 The spectacular Scottish Highlands location of Glen Etive and the wider Glen Coe area were used as the setting for James Bond’s ancestral home in the 2012 film Skyfall. In the film, when 007 and his boss, M, need a safe place to hole up and wait for a fearsome rival, they head to the Bond family estate, Skyfall, set in the breath taking landscape of Glen Etive. Along the way, the spy parks his Aston Martin on the side of the road to survey the glen’s deep valley, the meandering River Etive, and the rugged terrain carved out by glaciers centuries ago. It’s the perfect place for a leisurely drive on vacation, Aston Martin optional. 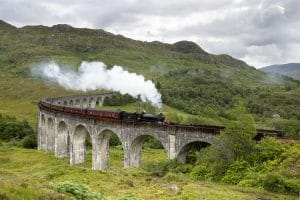 Harry Potter learns that he isn’t merely a muggle, but a young wizard, when he is invited to attend the Hogwarts School of Witchcraft and Wizardry. To start his new school and his new life, Harry must simply hop aboard the Hogwarts Express bound for the secret wizarding school in the Highlands of Scotland. In the Harry Potter films, the Hogwarts Express can be spotted on its journey north zipping over the stunning 21-arched Glenfinnan Viaduct, which spans 1,000 feet, carrying the train cars 100 feet above ground to the Glenfinnan Station. Visitors hoping to re-create the scene, can hop aboard the Jacobite steam train which runs from Glenfinnan to Fort William or Mallaig in the summer months. 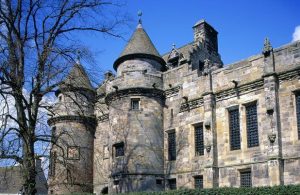 In Amazon Prime’s hit TV series, nurse Claire Randall (played by Caitriona Balfe) falls through a magical portal in 1940s Inverness and finds herself in 1743 Scotland. There she’s married off to clansman Jamie Fraser and embarks on a fraught, dangerous and passion-filled adventure through the Scottish Highlands. To walk in Claire’s footsteps, visit the Royal Burgh of Culross, a village that is one of the most well-preserved examples of a 17th/18th-century town in Scotland. In the series, Culross stood in for the village of Cranesmuir where Claire got to know her new surroundings, meeting her friend Geillis Duncan and helping save the life of a young thief. 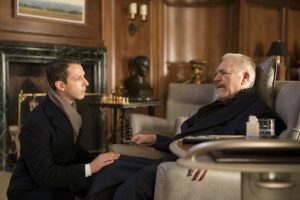 In the HBO triumph Succession which features the exploits of the Roy family, one of Americas richest empires. One of the many Roy trips taken during season 2 of Succession was to Scotland where the patriarch Logan Roy was honoured for his 50 years in business. While there, the Roys and the extended Royco family stay at a real 5-star luxury hotel, spa, and golf resort Gleneagles Hotel.

One of our most popular destinations The 5 star Gleneagles Hotel is home to 232 guestrooms and suites and three championship Golf courses. Surrounded by the Perthshire countryside Gleneagles is the pinnacle of Luxury in central Scotland and if its good enough for the Roys it must be the best. 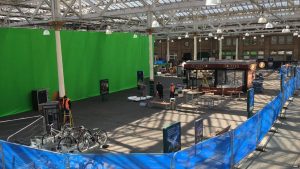 In 2018 Edinburgh’s Old Town appeared in Avengers: Infinity War as the hideout for Scarlet Witch (Elizabeth Olsen) and Vision (Paul Bettany). The two heroes stand outside a fast-food restaurant in the Old Town as they watch rolling news footage of an attack in New York.

If you are looking for the fast food shop that promises to “deep fry your kebab”, you will be sadly disappointed. These signs were set up specifically for Avengers: Infinity War, and were promptly dismantled after filming wrapped up. While the signs were taken down, the building is still standing.

One of Scotland’s busiest train stations was transformed into a superhero fight area for Avengers: Infinity War, as the Scarlet Witch and Vision are ambushed by some of Thanos’ thugs on the station concourse near platform 2. Thankfully, Black Widow (Scarlet Johannsson), Captain America (Chris Evans) and Falcon (Anthony Mackie) show up to save the day. 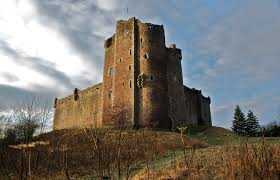 When the Monty Python crew set out in search of the Holy Grail for their 1975 film, they had a hilarious script, a bunch of coconuts, knit chainmail, and a few thousand dollars from investors like Pink Floyd, Led Zeppelin and Elton John. Because their budget was small, and according to director Terry Gilliam, the National Trust wouldn’t let them film anywhere else, they eventually set of their medieval film to pretty much one location — Scotland’s Doune Castle. The castle dates back to the 14th century, when it was built on the banks of the River Teith for the son of King Robert II. Doune stood in for almost every castle seen in Monty Python and the Holy Grail, including Castle Anthrax, Camelot (with the Knights of the Round Table meeting in Doune’s Great Hall) and Guy de Lombard’s castle, where a French guard taunts the knights from the castle wall, declaring, “Your mother was a hamster, and your father smelt of elderberries!”